Compassionate Inverclyde picked up the Voluntary Organisation of the Year title at Reach for the Stars, the Inverclyde Community Awards 2018, held in front of a capacity audience at the Waterfront Cinema Greenock with host, TV presenter Jean Johansson.

• Jenny Speck former Chair of Broomhill Tenants and Residents Association, for Volunteer Leader of the Year sponsored by Inverclyde Council;

• David Adams of Wemyss Bay Community Association, for Volunteer of the Year sponsored by Inverclyde HSCP. David sadly lost his battle with cancer in September, but in the knowledge that he had been selected as a finalist having been nominated by the community he loved and who loved him back. He was represented by his family and members of his community, who were delighted to collect the award in his memory.

The Voluntary Organisation of the Year 2018 category, sponsored by the Oak Mall Shopping Centre, was selected by a hotly contested People's Vote attracting thousands of votes for the four finalists who had been shortlisted by a judging panel back in September. The finalists and winner of each volunteer category were selected by independent judging panels.

Volunteer winners were awarded glass trophies, along with certificates and vouchers for them and every finalist. As winner of Voluntary Organisation of the Year, Compassionate Inverclyde won a £500 grant from the Inverclyde Community Fund, which is administered by CVS Inverclyde.

A highlight of the evening was the big screen debut of films of each of the 16 finalists shot by West College Scotland Creative Industries Television students, as part of their curricular activities.

"Our Reach for the Stars awards are a celebration of Inverclyde's vibrant voluntary sector and volunteer community," said Ian Bruce, Executive Officer of CVS Inverclyde.

"We congratulate the winners and, indeed, all our finalists, and thank our sponsor partners and independent judges who were faced with another tremendous challenge in making their selection this year. The Waterfront Cinema team were excellent hosts and films from Chris Bradley and his West College Scotland students were the icing on the cake, helping us pay tribute to the organisations, volunteer teams and individuals who make such a valuable contribution to local life, work and play here in Inverclyde."

Sponsors for the big screen awards night included Riverside Inverclyde, Inverclyde Community Development Trust and Volunteer Inverclyde – www.volunteerinverclyde.com. The Waterfront Cinema rounded off the evening with a feature film treat of the Nutcracker and the Four Realms for the audience of all ages.

Volunteer Team of the Year, sponsored by the Waterfront Cinema - REACH for Change and Trust Befriending. 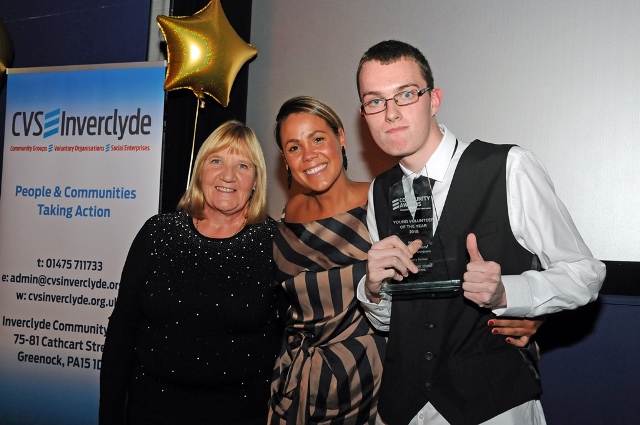 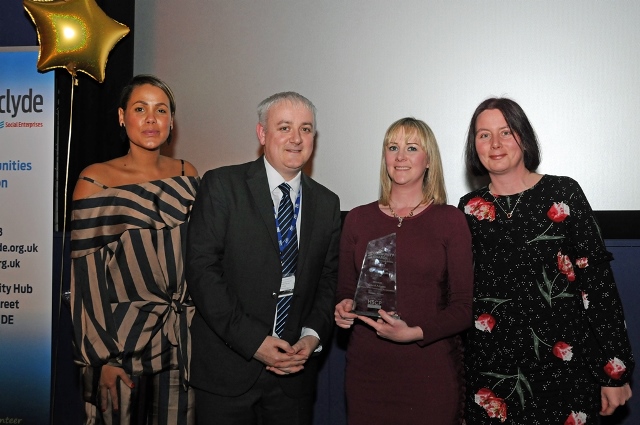 Daughters of David Adams pick up his posthumous award for Volunteer of the Year from Allen Stevenson of category sponsor Inverclyde HSCP with Jean Johansson. 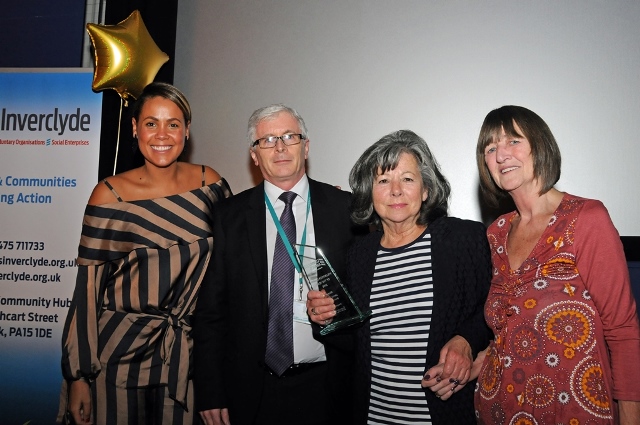 Jenny Speck (centre right) with her award for Volunteer Leader of the Year, presented by Grant McGovern, Head of Inclusive Education, Culture and Communities, on behalf of category sponsor Inverclyde Council. She is pictured with friend Alice McQuillion and Jean Johansson. 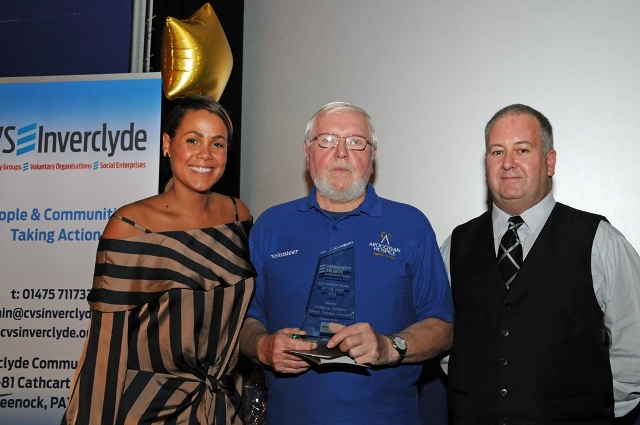 Picking up the award for Volunteer Team of the Year on behalf of Ardgowan Hospice Patient Transport Service is Jim Gannon, picture with John Cunningham of category sponsor the Waterfront Cinema and Jean Johansson. Group shot of the team below.