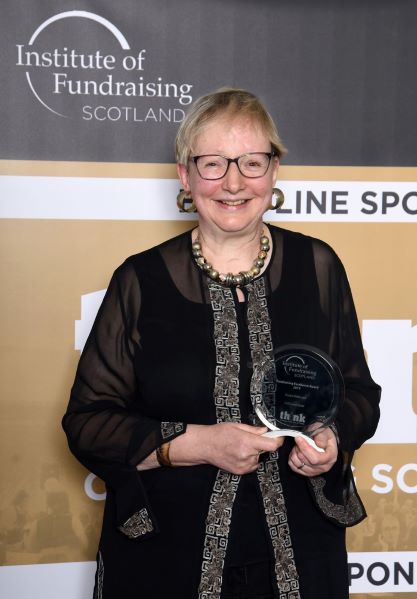 Run by the Institute of Fundraising Scotland (IoF), the awards recognise Scotland's best fundraisers and honour their success. Susan was joined by colleagues to hear the results at the awards ceremony and celebration dinner in the DoubleTree by Hilton Glasgow Central.

"We are absolutely thrilled that Susan's enthusiasm and work as a highly experienced fundraiser and trainer have been recognised by this national award for excellence," said Charlene Elliott, Chief Executive of CVS Inverclyde.

"Thanks to her wide range of skills, knowledge of funders and impressive network of contacts, Susan's work since joining the CVS Inverclyde team in November 2013 has been of great benefit to the local third sector, supporting communities and people through their fundraising challenges.

"Yet her influence goes far beyond Inverclyde. As a proud ambassador for CVS Inverclyde, she takes her skills to all corners of Scotland, for one sharing her knowledge through the Nuts and Bolts fundraising training packages she has developed. We are lucky to have her supporting CVS Inverclyde and the local third sector and so delighted for her significant win."

Commenting on her win, Susan said: "It was a complete shock to have been nominated for the Institute of Fundraising award by my peers and even more of a surprise to pick up this fabulous accolade. I'm delighted. It was great to have my CVS Inverclyde colleagues around me to share in the celebrations on the night."

Susan, who has lived in Gourock with husband Mike for 12 years, joined the voluntary sector after a career in the WRNS spent in teaching, resettlement and careers counselling. She started as an Appeals Office Manager, progressed through the ranks to become a Director of Fundraising, and was made a Fellow of the IoF Scotland in recognition of her substantial contribution to fundraising above and beyond her day job.

Her fundraising career has focussed on working with individual donors, major donors, charitable trusts and foundations, both as a fundraiser and grant-maker. She has worked with small community groups, larger Scotland-wide, UK-wide and international not for profit organisations and charities, across a wide range of sectors. 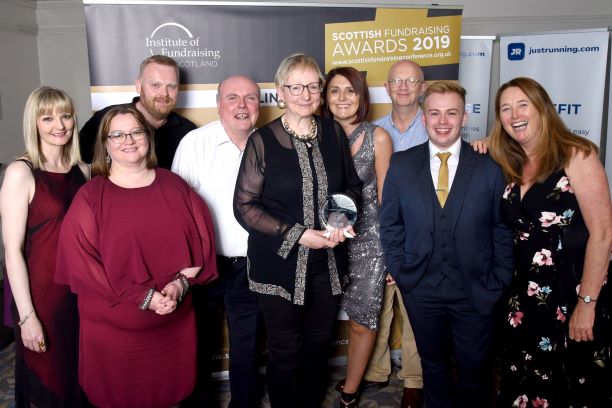 Susan with some CVS Inverclyde and TSI friends after picking up her award.